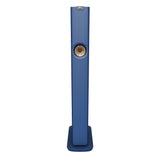 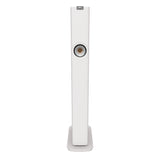 1 review
LS60W in Royal Blue is currently on backorder.

Celebrating 60 years of acoustic innovation, LS60 Wireless is our vision of high-fidelity sound for the future. An all-in-one speaker system that allows you to stream from any source and connect to any home audio devices with audiophile-grade power. The iconic slim design is the work of Michael Young and KEF product design team.
DISCOVER MORE
All owners of LS60 Wireless may be eligible to receive an exclusive KEF NFT – explore the unique artwork and our plans in the metaverse now.
LEARN MORE

"KEF’s slender LS60 Wireless feels revolutionary, and demonstrates to the world what the future of hi-fi could look like." - Aug 2022

See how it looks in your home

Not sure which colour to choose? Try our Augmented Reality function to check out how incredible LS60 Wireless will look and see which colour suits best in your home.
VIEW IN 3D

Easily unbox the LS60 Wireless in minutes by yourself and without the hassle to flip-over the packaging box.

What is in the box

Words struggle to live up to the reality of hearing the phenomenal LS60 Wireless in action. Simply book a demo and come experience what we mean when we describe its pure and natural performance.
BOOK A DEMO

EISA WIRELESS FLOORSTANDING LOUDSPEAKERS 2022-2023
"KEF’s slender LS60 Wireless feels revolutionary, and demonstrates to the world what the future of hi-fi could look like." - Aug 2022
FULL REVIEW

5 STAR REVIEW – WHAT HI-FI? SOUND AND VISION
“The KEF LS60 Wireless is everything a modern all-in-one hi-fi system should be, combining eye-catching looks, a suite of useful features and outstanding sound quality”-What Hi-Fi?,May 2022
FULL REVIEW

APPLAUSE AWARD - STEREONET
“With all the innovation and musicality packed into two sleek and stylish speakers, who needs to be wired for sound?”- Stereonet, June 2022
FULL REVIEW

"KEF’s slender LS60 Wireless feels revolutionary, and demonstrates to the world what the future of hi-fi could look like." - Aug 2022

“The KEF LS60 Wireless is everything a modern all-in-one hi-fi system should be, combining eye-catching looks, a suite of useful features and outstanding sound quality”-What Hi-Fi?,May 2022

Please visit our Product Support page for more details. KEF reserves the right, in line with continuing research and development, to amend or change specifications. E&OE.

For my 60th birthday my wife heard I wanted the LS60s. I originally got the KEF 104ab's when I was 16 and building my first stereo system. I wanted the Cornerhorns, but that was unrealistic to bring into my dad's house. I spent much of my time awash in the sound of those amazing speakers. I still have those them but when I was 40ish I got the KEF 3000 surround system to upgrade my home AV. Such bass, such detail. I still switched back to the 104s for music though.

The LS60s go way beyond my high school speakers, with the flattest response I have heard in my life, detail only surpassed by the Magnapan speakers I also wanted as a kid. There is no coloring of the sound, no frequency where the speakers get a bit out of control, no harmonics, no lost range. The 104s had a big gap between the one woofer and the tweeter, the sound was amazing, but you knew you were missing a bit of the artists voice.

All that being said, there is something comforting about a boomy speaker, over emphasizing the bass can make you think, "Wow, is all that coming from those little speakers". I have a JVC table stereo that does that, sometimes the HomePods do too. It's artificial, but can be comforting. The LS60s will not do that. If the sound is there in the original track you will hear it. Everything is so clear and precise.

My biggest complaint is that they are still slow to roll out. They barely arrive for my birthday and when they developed a problem I was w/o them for a month waiting for a second pair to make it to the states. And their documentation (very hard to find) appears to not yet be fully migrated from the LS50W speakers including settings for Desk Mode.

I look forward to knowing more about configuring these speakers, I hear placement is the key, but no one on Reddit or Youtube has posted much info yet.